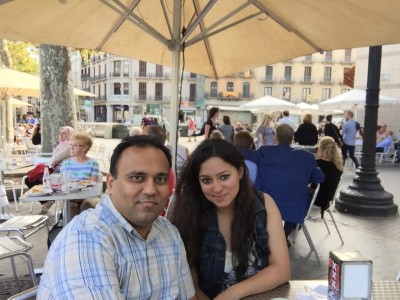 Spain showed us many colors of life in 8 days that we spent there. My experience varied from almost being robbed (yeah…almost)to being dazzled by the dance performance and traditional show in Seville to partying all night in Madrid ….and of course not so proud moment I had at Bull fight in Madrid….  Stay tuned for all the juicy updates.

We arrived in Barcelona at around 6pm after fun couple days of partying at Oktoberfest (Earlier Post). After napping and freshening up for few hours we were hungry and needed a big meal.

Spain is foodie’s paradise. Spain is very well known for its seafood especially Paella, Tapas & Sangria. I am not a seafood eater at all except grilled fish so I was not looking forward to the food scene in Spain at all.

This quickly changed from our very first meal itself. Our hotel suggested a nice restaurant called L’Amfora. It was few blocks away from the hotel and close to the Magic fountain. We decided to go to Magic fountain first.

Magic Fountain is nothing spectacular, I mean don’t get me wrong its quite elaborate but It is hard to beat Bellagio’s magic fountain(Vegas). After a short stroll we showed up at the restaurant and ordered a carafe of Sangria!

Sangria in Spain is very different compared to US. It’s very potent, flavorful and is served minus the fruits at the bottom. Its served in carafes at most places and not per glass. It’s safe to say that we had carafe of Sangria at every meal and sometimes between meals too!

Okay, so back to the restaurant. Most of the menu as expected was quite seafood heavy and I was not too pleased.

Whereas, Ricky was in a food heaven and had his eyes set on humongous seafood Paella being served on the next table. Paella is meant for 2-3ppl. Its huge and can’t be served in smaller quantity.  Unfortunate, it was getting close to their closing time and we could not order Paella anymore. The young man, who I believe was the owner of the restaurant as well  recommended two fish entrée one with mushroom sauce and the other one with fresh tomato sauce paired with their popular tomato bread. 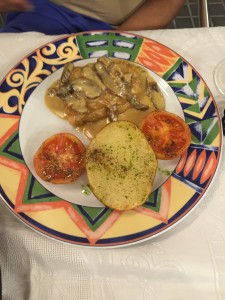 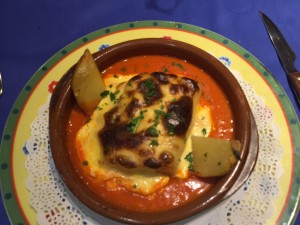 Food was mind blowing with a capital “B”. I mean so simple yet so amazingly delicious. It is safe to say that this was the best meal we had in all of Spain! I was in food coma from the very first bite.

One thing is for sure, we put out a very average and mediocre food here in US. I mean even the best of best meals here comes across as very mediocre after tasting food in Europe. I fail to understand why? Do we simply complicate food here? Or have we forgotten the importance of simple basic ingredients and herbs?

We ended the night with a late night stroll at La Ramblas. We found La Rambla fun for some late night drinks and people watching.

Next morning, we had an amazing Spanish breakfast and started our day with a visit to Sagrada Familia church & Barri Gotic in Gothic quarter. 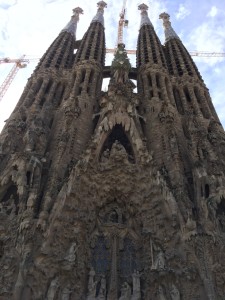 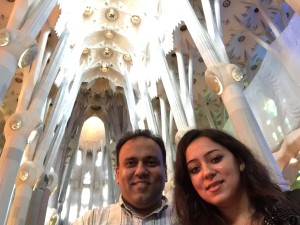 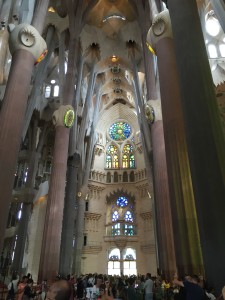 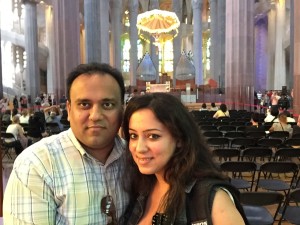 For lunch we went tapas and pintxos hopping and tried lot of small Tapas bars in Barcelona. Basically lot of small bite size pintxos are displayed for you and you go around the table picking what you like and wash it down with some yummy house wine as you mingles with locals and other tourists in the bar. 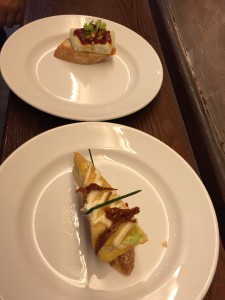 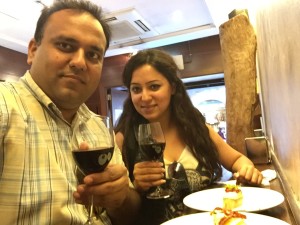 In the evening we took a cab from our hotel to visit the romantic Montjuic Castle. The Castell de Montjuïc is on the highest point of the Montjuic hill at 170 metres altitude with great views of Barcelona city and the port area. 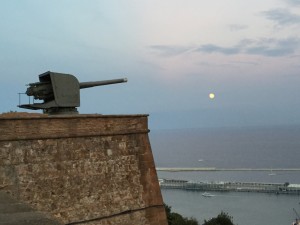 For dinner, we tried a nice seafood place called Catalyn. We decided to take a local train to this places as it would be quickest and cheapest way to get to this part of Barcelona. So of we went out the door with our small backpack (day bag). We used it every day throughout our trip It’s easy to carry your camera, maps and other needed things that you may need throughout the day.

Spain, like much of Europe has a very high rate of pickpockets. These guys are highly trained and its extremely hard to spot or realize what is happening with you. They travel in groups and will use that against you to distract you.

We recently had a friend come back from Italy and someone stole their expensive SLR from the camera bag that they were wearing across their body. This will give you the extend to how good these people are.

We faced this very exact situation.

If you know me personally, then you know that I like to be very much in control of situations. I am very well aware of my surroundings. Maybe this comes from being a women brought up in India or staying alone in Canada, where I traveled at odd hours.  It just comes to me naturally as I am an observer by nature.

Anyways, back to the incident-

I took notice to a very funky/artisty shirt guy as soon as I entered the subway station and he was heading in the same direction as us toward the escalator with his friend in tow. He was right in front of us trying to make his way to the escalator.

Suddenly his friend was no longer with him as he got distracted by another friend he noticed. Few seconds onto the escalator and this funky shirt guy wanted to go back few stairs where his friend was standing alone and asked to be excused.

However, I felt really odd at the way this guy first looked me in the eye to quickly look away to something behind me and then back to my face as he quickly made his way back to his friend gesturing me to give him some room to pass by.

Nothing was really unusual or odd but something had ticked me off with the 5 second look we exchanged.

Soon enough Ricky was showing me something he noticed far away but I wasn’t reacting. My mind just wanted to stay where I was and concentrate.……and the unimaginable happened I felt someone touch a zipper of my bag pack and I turned back to find his hands on my zipper. It was that same funky shirt guy…. He quickly moved his hand away and pretended that he was flying the fly off me or something and suddenly rushed down the escalators brushing against us. They were both quite scared and stopped at the end of escalator to look up towards us and gauge our reaction to figure out their next steps.

I saw my bag zipper slightly open but not wide enough to steal anything (I had caught them mid act) and there was no doubt in our mind as to what had happened. We had everything from our 2 Iphones, camera, wallet to our passports in our bag that day as neither one of us wanted to wear money belt that evening. Bad decision…I am so glad they couldn’t steal anything!

I was ready to take action and confront them and ready to rush down the escalators but suddenly the look of fear in their eyes changed to a smug smile on their faces as he looked at someone behind us. We turned around to find a gang of few right behind us exchanging reassuring smiles with each other and talking with sign language pointing to us. I knew right then this was not the battle I wanted to pick as a tourist late night on a sub way station barely with people in sight.

Needless to say that it was really shocking and I was deeply affected…this kept playing on my mind throughout the trip and I was little extra vigilant throughout.  Anyways, not letting this dampen our spirits we continued our journey to the restaurant and had another great meal. 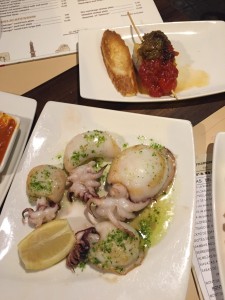 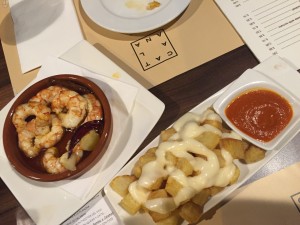 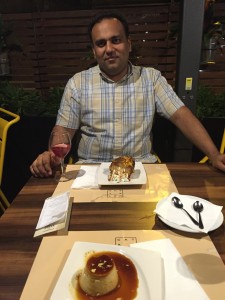 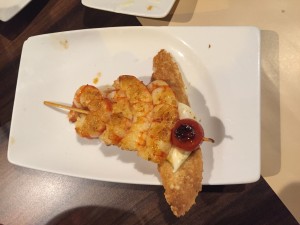 Next day, we started early morning to Montserrat Mountains & Monastery (outside Barcelona). This was the most gorgeous site in Barcelona. 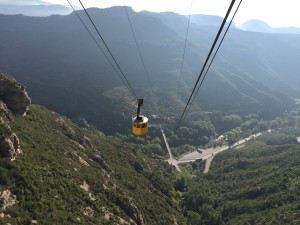 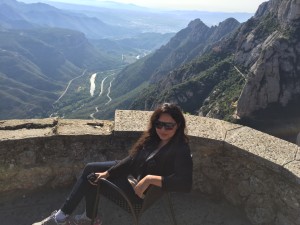 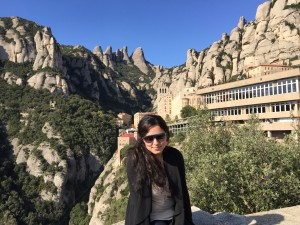 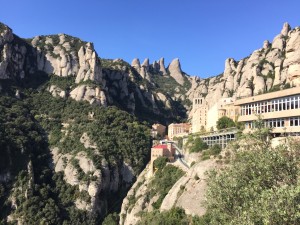 We rented bicycles after coming back from Montserrat in the afternoon and went on our own city tour stopping over as we pleased and eating delicious food throughout the day. 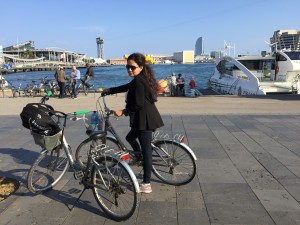 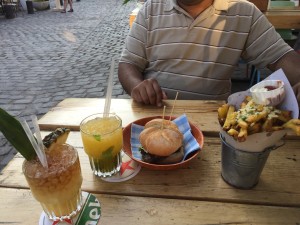 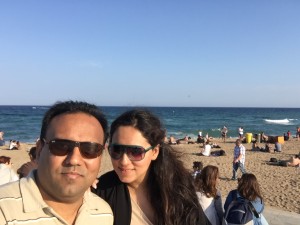 Tonight was our third night and we had to go back to L’Amfora restaurant to eat that mushroom fish and try their Seafood Paella. This Paella is the BEST we had throughout Spain. Can you imagine me finishing half of it? I proudly cleaned up the Paella. 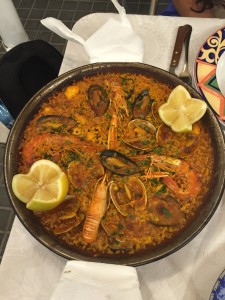 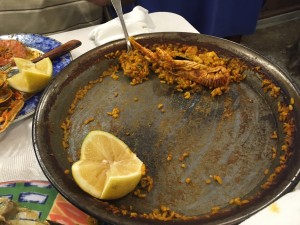 Barcelona, was our most favorite city in Spain, It not only was stunning but converted me from seafood hater to seafood lover!

Next Week Come Back For – Part 2  Seville, Spain.